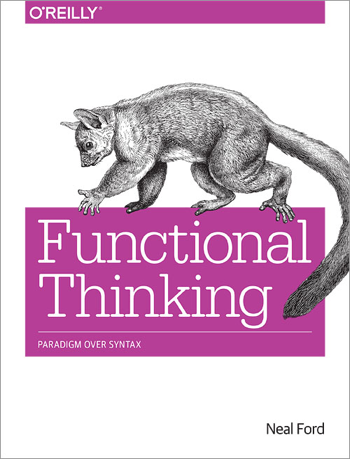 
If you want to take advantage of functional programming features in Java and other languages, this in-depth guide takes you beyond syntax and demonstrates how you need to think in a new way. Software architect Neal Ford shows intermediate to advanced developers how functional coding allows you to step back a level of abstraction so you can see your programming problem with greater clarity.

Each chapter shows you various examples of functional thinking, using numerous code examples from Java 8 and other JVM languages that include functional capabilities. This book may bend your mind, but you’ll come away with a good grasp of functional programming concepts.

The animal on the cover of Functional Thinking is a thick-tailed greater galago (of the Otolemur genus), also known as a thick-tailed bushbaby. These primates are native to southern and eastern Africa. Galagos are mostly arboreal, and prefer tropical and subtropical forest habitat, though they can occasionally be found in woodland savannah.These animals have thick brown or gray fur, large ears and eyes, and long tails to help with balance as they travel through the trees. They are also equipped with long fingers and toes tipped with thickened skin pads to grasp limbs. On average, they are a foot long (not including the tail) and weigh 2–3 pounds.The thick-tailed greater galago is nocturnal; during the day, it rests 5–12 meters above the ground, concealed within a dense nest of vines in a tree hollow. They are generally solitary, and mark their territories with a scent gland in their chest as well as urine (though male territories often overlap with those of females).At night, galagos come out to forage for food. They are agile and able to make short jumps from tree to tree, though they usually just walk unless alarmed. They eat fruit, seeds, acacia gum, flowers, and insects. Biologists have observed that each individual animal spends nearly half of each evening traveling and only 20% foraging, and often patrols the same route each night.The cover image is from Cassell's Natural History.

Available at O'Reilly, Amazon, and other fine book sellers.